This project has been a long time coming.  I can’t even tell you how many hours I worked on the pallet deck.  I actually started building the deck last summer, but the pallet shed consumed most of my time leaving the deck on hold.  So this year I made the deck a high priority.

To make things even more challenging, each pallet had to be cut apart and all of the boards trimmed.  Then trimmed again if needed during the entire building project.  I spent more time working with the wood then actual building this deck.  This project consumed more time than I ever imagined. 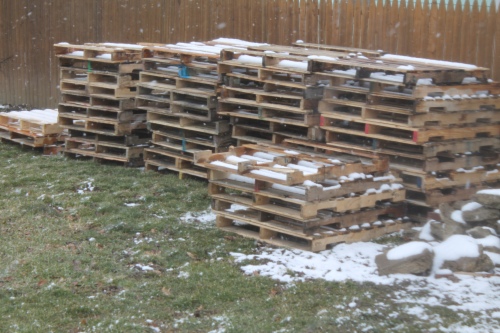 In the photo above you can see the upper level and the lower level.  Both levels of the deck are simply pallets.  Under each pallet, I placed the runners or middle part of the pallet on the ground.  Some areas needed more runners than others to achieve a level base.

The lower level was dug down a bit so the pallet would fit under the door.  The upper level was then leveled using runners. To give the outside edge a finished look, I covered the sides with pallet wood. 28 pallets were used to create the foundation ( 7 pallets x 4 pallets). I’m not sure how many pallets I actually ripped apart to cover both levels.  I’m guessing well over 100.  The pallets I used were far from perfect and not the same size.  I only used narrow boards to cover the deck and saved the wider boards for future projects.

The total cost of this project is well under $200.

On to the next project. Yes, it’s started and no it won’t take a year to complete.

Thanks for stopping by!